Whilst other projects have been eating up my limited free time I have managed to make some progress on the Redcoats on Mars model front painting up this Ironclad Miniatures armoured car. The model is pretty straightforward with a large resin hull, separate resin turret and white metal wheels, maxim gun and funnel. 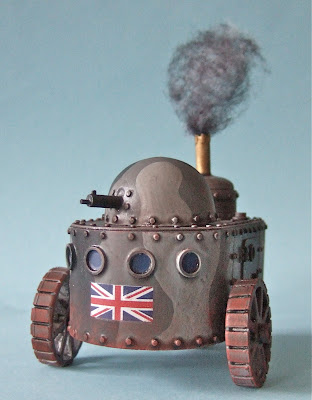 I had originally intended to paint the model up as French but I was unable to source any suitable French flag decals (I wanted to avoid using aeroplane roundels). Of course Sod's Law dictated that twenty four hours after I put the Union Flags on the model I received an email from their supplier listing new French flags! Ho hum...

I'm quite pleased with the way the model has turned out and I will certainly be buying some more from Ironclad as well as some of the other designs. Personally I prefer my Victorian contraptions not to have tracks as I think that is too much a twentieth century conceit and not in keeping the period, but I appreciate I am probably a minority of one here and it will not matter in the rules whether you like tracks or wheels on your vehicles. Fortunately Ironclad produce a nice variety of wheeled vehicles and some of the tracked ones look like they will be easy enough to convert.
Posted by Steve at 10:48 3 comments:

Nearly twenty years ago I inserted an advert in Wessex Games' Hell by Starlight rules for our planned third game release - Redcoats on Mars. A draft set of 1/300th rules was sat on my Apple Mac but for one reason or another we went down a different route VSF wise with Aeronef and then Land Ironclads (and hopefully sometime this year Aquanef). However, despite producing games allowing for epic air, land and sea battles I still have a love of "God's Own Scale" - 28mm and a desire to play VSF games with 28mm models... 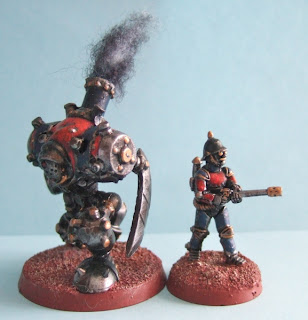 Over the last couple of years an idea has germinated in my head, to produce a set of 28mm VSF wargames rules, not tided to a specific miniatures range, indeed if anything, encouraging players to buy from the manufacturers whose miniatures they liked the best and utilise their imaginations in producing fantastic machines, aliens and scenery. Two fingers to spoon-fed wargaming!

The rules are in a very rough Alpha testing stage at the moment (hopefully public Beta testing will be later this year) but I thought it would be an interesting exercise to have a public conception as I try things out, as well as this blog being somewhere I can display the progress of the armies and models I'm  collecting and painting for inclusion in the rulebook.

I'm not quite sure how long this journey of genesis and development will take, but hopefully you will be interested enough to tag along...